Waterholes of Etosha. The Etosha National Park’s waterholes each have their own character.

Etosha National Park is home to about 40 watering holes.  Some are natural but many are man-made and fed artificially from a borehole.

The number of game at the each waterhole vary from season to season, depending on the rainfall and the migration of the animals. Many natural waterholes are often dry during the winter when rain does not fall and some artificial waterholes can also be dry periodically due to a rotation system of providing water to the game.

The best season to visit Etosha is the winter from May to August to see game gathering at the waterholes, especially early morning or late afternoon.

The list below is in alphabetic order and the waterholes we believe are the most interesting are in bold.

A popular artificial waterhole for birds close to the Nehale Lya Mpingana gate. A popular waterhole for plains game to drink. This artesian spring is sometimes visited by lion and spotted hyena. The large umbrella thorn tree attract birds of prey. This natural spring coming from underground is a regular place to watch giraffe, lion, spotted hyena and especially eland not easy to see elsewhere. This artificial waterhole at the base of the Dolomite Camp attracts a lot of game including elephant, rhino & lion.

Although often dry, it is a fairly good place to see a rhino.

This artificial waterhole attract a lot of game in the dry season. Big herds of elephant, gemsbok (“plains of the oryx“ in Afrikaans), giraffe, red hartebeest, springbok and zebra.  Lion may also visit the place.  Best in afternoon. A natural spring within dense mopane trees which attracts a lot of birds during the day.  In the late afternoon, lion, hyena and elephant herds may come to drink.  There is even a chance of spotting a leopard here.  Best in the morning and afternoon. Fed by a natural fountain, this waterhole is often visited by Kudu, zebra & elephant as well as predators, such as cheetah and leopard. Imagine sitting at an amphitheatre surrounded by moringa trees to watch the game attracted by this man-made waterhole and floodlit at night.  There is a good chance to see black rhino, leopard and large herd of elephant.  Watch for the honey badger haunting the campsite at night and do not feed these deceptively adorable creatures which will turn into gremlins! 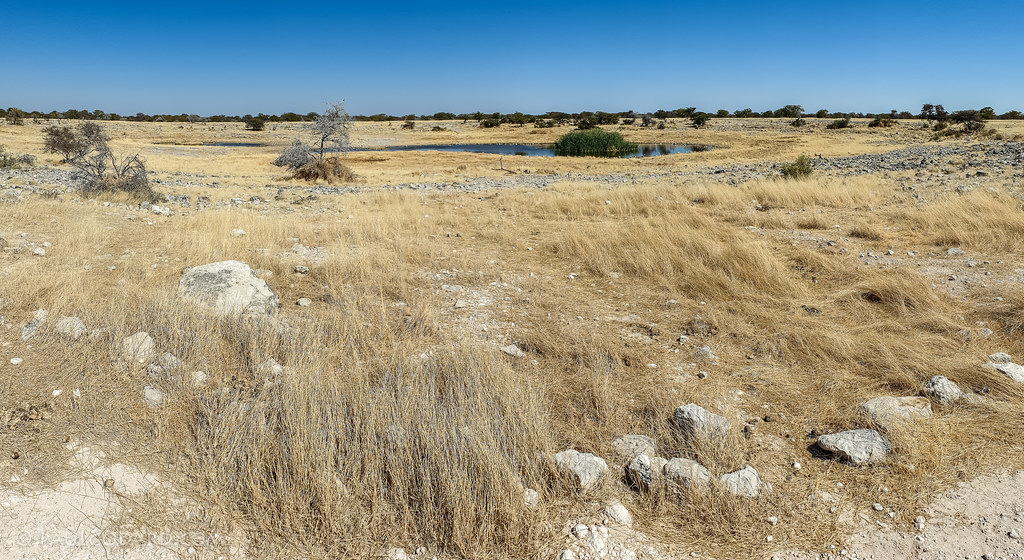 Animals often cross the parking area to come to drink at this picturesque waterhole.  Best in the morning.

A typical waterhole where it is best to be patient to see large breeding herds of elephant, stalking lion, eland, kudu, black-faced impala and warthog.

Although this waterhole is often dry, it is a good place for landscape photography.

This water hole lies adjacent to Namutoni rest camp and is illuminated at night. A good spot to visit late afternoon before the sunset curfew to watch game come to drink and to spot the tiny Damara dik-dik in the bushes along the road.  Keep in mind that the sun will set behind the waterhole, so animals will be silhouettes. A man-made and floodlit at night waterhole inside Namutoni camp. At sunset, the game will be silhouette. A small water level spring feeds this quite hidden waterhole which can attrac kudu, zebra & elephant. Leopard & cheetah can sometimes be along the circular road. A dry fontein with little interest. This is a very picturesque small and impressive waterhole, especially when visited by a herd of elephants in the afternoon. This artificial waterhole which is floodlit at night attracts elephant, endangered black rhino, giraffe, kudu and plains game almost every evening.  Lion may make a kill nearby and attract spotted hyena.  The perfect place to sit, drink a beer and watch for hours.  Best in Jun-Dec.

This is the strongest contact spring situated on the edge of the pan where cheetah and lion are regular visitors.

Large herd of elephant often come in the morning to have a drink and wallow in the mud (the perfect "elephant bath" in Afrikaans). A impressive passerelle takes you to a two-level bird/game hide above the man-made waterhole. A very popular drinking hole, visited by quite a variety of animals including lion. The best place to see lion although they might be in the bushes far from the parking area. Best in afternoon or morning. A dry fontein on the edge of the pan with little interest.

This waterhole is the best place to see roan antelope.  It is close to the fairy-tale moringa forest. A picturesque site along the water channel from the Adamax pan.

There is always something happening at this large waterhole where elephant, giraffe, kudu, red hartebeest, zebra are often together, sometimes lion and even leopard. A beautiful site and popular natural fountain - due to low salt content - close to the salt pan and which can attract lion, cheetah climbing in trees and black rhino. Sometimes, a curious yellow mongoose might come right up close to your car. Best light in the morning. A natural fountain on the edge of the pan which can attract some game including lion and black rhino. A man-made waterhole often visited by many elephant, eland and other plains game. Best late afternoon.

A waterhole formed by contact spring on the edge of the pan which attract a variety of game even white rhino.

A beautiful site on the edge of Fischer's Pan where two makalani palm trees are perfect for a sunset photograph.